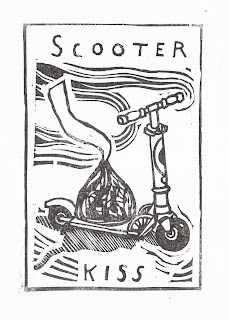 After all the pompousness of my last post I thought I better come clean. Another sketchbook doodle that has become a little print. No deep meaning. Not "ART" . The print version at 4" X 6" is about 8X larger than the original drawing done from memory.
Both my children use their scooters everyday so it's an object of daily life for us. The chocolate kiss on the other hand is from my memory. I've moved on to better chocolate. Although, if there's a bowl of them at the doctor's office or the bank I will still eat them without shame.
The title was added when I carved the block. I think I might remove it. Or just print it on the little white label.

Strunk and White in Blue 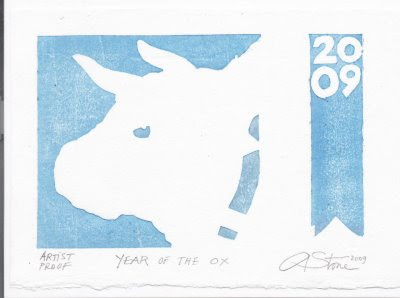 In High School, The Elements of Style by Strunk and White was a required text every year to assist us in learning to write in a concise and clear manner. I still use it, often subconciously, to edit letters, my children's homework essays and works I translate.
The chief concept of eliminating all the unnecessary wordage that doesn't contribute to the content is still sound.
Not everything written is poetry and often everyday communication is full of extra detail that contributes little other than bulk. I don't have any training in graphic art but I admire the work of others who have the gift to convey a complete and powerful thought or concept with a minimum of detail or line. If road signs and logos would be on the one end of the spectrum then the beautiful, concise draftmanship in the simple sketches of Rodin or Schiele or Matisse might be on the other end. (I'm partial to nudes).
This came to mind as I was printing, over and over again the copies of my Ox print.
Working light to dark, I printed the yellow plate first, the numbers in 2009 clearly legible the rest an odd assortment of circles and shapes.
Next, the red plate in a nice transparant, clear pigment. This overlapped the yellow a bit making a nice orange and filling in what would become the red yoke.
But before I printed the proofs of the blue block, I pulled a few copies on clean paper to see if the ink was printing clearly and I had to pause.

This block, printed all by itself, was already complete.

Without the keyblock and without the two other colors everything I wanted to include was already here: the bull, the strong contrast of horns against sky, the year. While I did lose the idea of the Italian Chianina breed and the "details" of the chain of the nose ring or the shadows of the neck, and the nice contrast the black nose and horns made against the white body, this was all "extra detail" that added bulk but not much content to what I had hoped to produce.
Hmmmm.
The nagging voice in my head reminds me that I could not have produced this blue block in isolation. I don't have that economic, bold skill in composition and draftmanship that I admire so much in the work of others. I can get there, often laboriously (rather than effortlessly) by producing in bulk, and then through the editing process, working to eliminate what is nonessential. In times like these, I need the help of a good, disinterested editor who with a red pen can slash through the irrelevant or needlessly showy, or just plain badly done. Or I need just the clarity to do it alone.
But, I went ahead and printed the blue block over the others. And then on top went the keyblock in sumi ink mixed with a sepia tube watercolor. It was only partly because I didn't want to waste all that paper already cut and printed to start over. The other reason was I wasn't really able (willing?) to discard the original idea and all the work I did to get there.
So the finished, four-block, four-color image I spent a month working is the one that will go out in the mail next week.

I kept a few of the blue ones. One to file in the small folder I keep of the works I consider successful and the other to post on the corkboard over my workbench in my studio as a visual reminder and reprimand of what I want to accomplish and what I'll have to do to get there.
Posted by Andrew Stone at 10:22 AM 1 comment: Links to this post 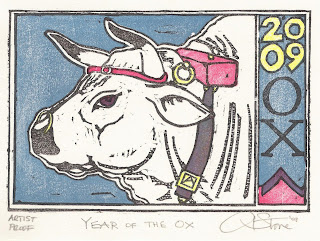 One of the most ancient breeds of cattle still alive is the Chianina. It had been depicted on Roman sarcophagi and ancient painted scrolls from antiquity. It is an enormous beast, easily surpassing 2200lbs live weight and was the beast of burden of choice for the ancient Romans as well as for the prudent contadini (peasants) for its rustic and thrifty nature. It is a beautiful pure white color with black mucous membranes and horns that are black when young and lighten on ageing.
When the tractor began to replace animal traction in the 1950's it survived due to it's popularity as a source of meat and the Florentine beefsteak still eaten in trattoria all over Italy usually comes from this breed raised in the region of Maremma in southern Tuscany.
It has been imported all over the world and in the USA, in the Northeast where small pockets of stubborn small farmers keep working the land via animal power the Chianina can also be found harnessed to the plow and cart.


2009 is the Year of the Ox according to the Chinese Zodiac and out of respect for the thousands of years that this beast has worked the fields of Italy and abroad he/she is the subject of my annual, late-to-go-out greeting cards.

Anyone interested in Animal traction in the modern age should check out Ruralheritage.com or The Small Farmers Journal for information on the economics and ethics of small farming with draft animals.


Year of the Ox
Japanese woodblock print in four colors.
Posted by Andrew Stone at 11:19 AM 2 comments: Links to this post