I carved and printed a circular bokashi/shading to each donut during the printing phase as one of the impressions of my donut print. 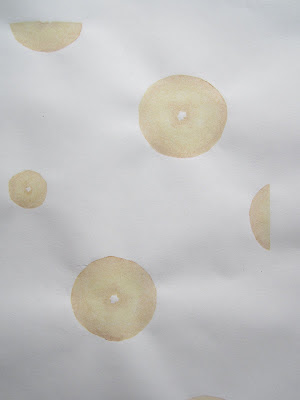 This is what lies under the marble dust"powdered sugar".
And here's the block it printed from: 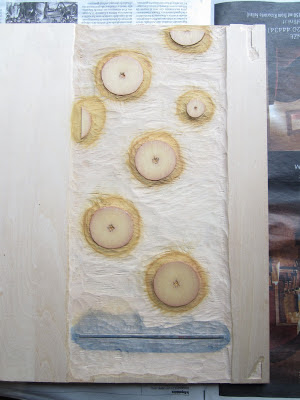 Then, another block, fairly similar but with the donut shapes just slightly smaller was used to print a mixture of gum arabic and paste transferring the glue lightly with the baren to the surface of the paper.
I then sifted (I used a very fine tea seive) very finely ground marble dust (used for gesso) onto the damp glue and then tapped it off.
Despite being almost talc-like in consistency it fell in smallish granules (I think due to electrostatic charges) but gave pretty close to the effect I wanted.
(I had also tried talc and rabbit skin glue as alternatives). The talc worked great but the print smelled like a beauty parlor and while Marble dust is inert and safe to work with the talc isn't really good to breathe so I didn't want to be dusting it on 20-30 prints.).
I wasn't too sure how permanent my "sugar" printing would be so I made sure there was a good layer of color underneath in case the sugar falls off (It's pretty heavy and seems to like to shed of rub off if you touch it). But there's a donut underneath just in case. 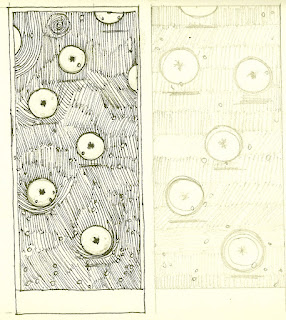 Although it might have been more coherent to print these sketches first, I wanted to include some of the preparatory drawings that I used to create this print.
I can't remember if it was from a dream, or just something I jotted in while on the phone or doing something else but this print started off as a sketch pretty much like these later ones, done to try to fit the paper size restrictions for the exchange I was participating in.
It went through lots of iterations and originally would have been a broader/bigger format. However, the Baren Forum exchange #54 for which this was my entry had a defined size: Hosoban,
which would have traditionally come from a half sheet; torn again into vertical thirds giving a pronounced vertical/horizontal axis at 5.7" x 13". 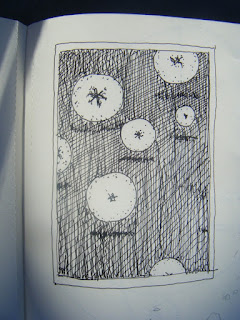 Meanwhile, while back in the US I ordered some new papers to try out hoping to find some papers to bring back to Italy.
The paper I hoped to use, Kizuki Kozo from the Japanese Paper Place in Toronto, they recommended as one of their favorite already-sized papers for moku hanga.
It's a lovely paper but thinner than I had hoped (40g/m2) and felt pretty soft, with some fibers already visibly protruding on the surface.
And indeed, it proved to be a little too soft and lightly sized for my purposes as on the first 1-2 impressions the paper seemed to stick to the block/get surface abrasions and the finished proofs were a little too matte and soft in color (a sign of not enough size).
So just after starting my actual print run I actually abandoned the 26 sheets I had cut of this paper and had to cut down new paper made up of what I had on hand in Italy.
( I had two full sheets of Kihada--a heavy mulberry/pulp paper from Japan (Woodlike Matsumura), a few small pieces of Echizen Kozo (McClains), and some midweight kozo/pulp paper whose name had fallen off last year.).
I cut these down, dampened them and these became the final prints--
(with the addition of 4-5 of the original kizuki kozo that I kept printing on for reference).

Meanwhile, I still have the 26 pieces of Kizuki Kozo that I had started to print on--the first yellow background bokashi got printed before I pulled them out of the stack... so I decided I will have another go in the future but with additional size.

Just before heading back to the US this week, I mixed up a batch of winter size and once they were dry I re-sized them with a mixture of 5g alum/17g glue to 1L water. (It might be too strong as there is some size already on this paper and they ended up a little too "shiny"). 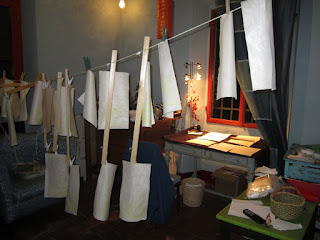 These have since been dried; and put aside to settle/age. They'll be ready to print on when I head back to Florence in January.

I hope to have a go at a variant printing:
I'd like to cut another block; I still want to see what that wavy oak block from my first post/idea will print as a background and I think I'd like to play with a blue/gray background and splotches to make it a little more subtle.
So stay tuned for a second state.


Posted by Andrew Stone at 9:18 AM No comments: Links to this post

Revenge of the Sugar Donuts 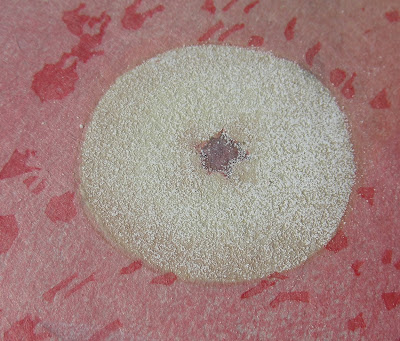 They came--
Not two-by-two but in sixes and dozens.

Almost all human cultures have not only a complex cosmology of the origins of Man and the World but they almost ALL have some version of a fried tasty cake or dumpling.
I decided that enough artists have fully explored the nature of Myth, Symbol and the mystical origins of Spirit and Culture but few have adequately explored the elaborate ramifications and layers that involve millennia of deep-fat frying. 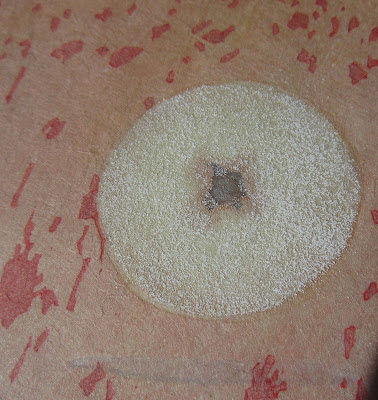 This print comes from one of the many funny drawings doodled into the margins of my sketchbooks. No deep meaning.
Not unless you want to dig a little bit.
Posted by Andrew Stone at 11:31 AM 2 comments: Links to this post