Now that I've started printing editions or multiple copies  with the idea of eventual shows or possible sales, the issue of print quality, consistency, and printing defects are becoming more important than they used to be when I was primarily concerned with just learning the craft.
I'll Leave aside the questions of artistic merit--as a bad idea can be executed flawlessly--since I mostly wanted to touch on the conflicts arising from trying to decide what level of imperfection I can live with (or expect others to be o.k. about buying).

My early errors were fairly easy to detect and are common among beginners.
Unwanted embossing from inadequately cleared borders or empty spaces and unwanted ink blotches or spots from where the wood wasn't cleared away sufficiently and ink was being picked up by the damp paper. 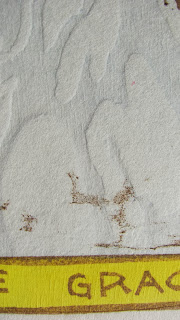 These are still concerns and do still crop up from time to time--especially if I am tired or at the end of a long printing run.  IF they are at the borders of the paper--well outside of the print area --or if they don't really detract from the visual impact of the print I usually allow some level of spotting.  In the trash bag print the spotting was too intrusive and obviously a mistake while in the little fulcrum print,  the black streaks in the gray mass/color look like, and were, deliberate-- even if there is a lot of print-to-print variability in how visible they are (from differences in baren pressure during printing).
Other early errors have mostly vanished. I no longer find myself gluing my expensive paper  to the blocks from too much paste and not enough time for the block to charge with moisture and I very rarely print on the wrong side of the paper or inadvertently lay the paper down from the wrong corner throwing off the registration. (But at least one of these will still happen once with each new print I make, so I'm not immune.

But as I start to number prints in an edition that took a long time I find myself thinking long and hard about the culls.  Some defects really are ok at my level of printing--they show that these are hand made; occasionally add vibrancy or energy to a print and do indeed become measures of where I am now as a printmaker.  Sometimes I find myself with NO perfect prints..then I'm more prone to look at the prints I do have to try and decide if I should start over or try to pull out the few that aren't really spoiled by their imperfections.

I'll list some of the common errors that I found in my last few prints and try to post some photos that illustrate the defects.


Out of register; this comes (in my work) in two versions:
one is an attempt to overprint the keyblock but either the paper or wood size has changed throwing it off just a bit or I had issues laying the paper down exactly right on both impressions.
(thicker papers can often be printed exactly over and over again while thin papers are more subject to some kinking or shifting during the delicate stage of setting the paper into the registering notches).

The other is just a color block that doesn't quite mesh with the others or the keyblock.

Color bleeding: usually from printing too wet/sloppily. Extra moisture and pigment will collect at the wood edges and can squish onto the surface when printing--especially on thin papers where the excess moisture has nowhere to go.


Uneven color-blank spots:
Sometimes, instead of too much pigment or moisture, there's too little. If the damp pigment dries on the block before you can lay your paper down it won't print. This will result in bald or uneven color patches.
This can usually be remedied (partially) by reprinting the same color again but while the pale area will now be ok, the rest of that color area will be much darker from the printing of another layer of pigment.

In this case, there's also a bit of unwanted embossing at the bottom of the paper....but I guess I decided this was ok as, unlike the others pictured here, this copy ended up in the signed and numbered pile of finished prints...


I moved into my new studio and finally had a chance to start in on the long backlog of prints I've been meaning to tackle in the last 2-3 Years.
But instead, a bit taken aback by the sudden freedom, I had trouble forging ahead and seemed a bit stuck.
Wood tends to be the muse that gets me thinking and in this case it was a box of 24 4"x6" Shina blocks I got on sale during the McClain's Summer Sale that got me working again. But, there are lots of ways to move. You can go forward, or backwards, or sometimes just pivot a bit while you wait for the momentum to build enough to get you actually moving.

This print is based on very simple drawing/a doodle really from my sketchbook done a few weeks ago--just a few lines making shapes that suggest other things. 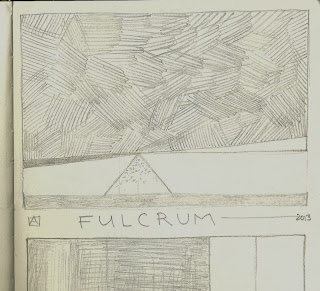 The fulcrum is the subject and focal point but it's the large heavy mass above that interested me the most.

The color blocks were all carved in Okoume marine plywood--it has a pronounced wood grain that I tried to emphasize during the printing.

I printed this in two color variations--with either a blue or teal "sky".
One in blue and on thicker handmade paper and
Another in both color variations but on a variety of thinner papers.
All are printed on paper I sized during my last set of sizing experiments.

The only other significant variation is the addition of a subtle bokashi to the tip of the orange triangle to suggest a shadow from the mass above.

Printed from 6 blocks and about 12 color impressions.
EV of 50 on hand-sized, thinner weight, varied, Japanese papers and another smaller edition of 12 on heavy Misumi Japanese washi.

Brushes on a budget 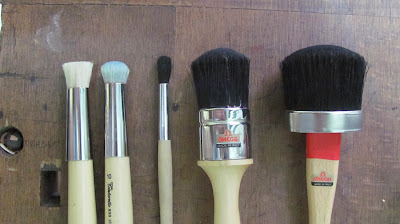 While I was looking for some small, inexpensive stencil brushes for a moku hanga class I taught a few months ago, I found some cheap, Chinese, bristle brushes for about $3.50 each. These were disappointing. They were too stiff and shed hairs like crazy. The students had a really hard time getting any decent coverage and they left lots of very streaky marks on their prints. So I had almost abandoned them as a waste of money. (Worse since I had twelve students and so was left with 12 brushes...).
But a few weeks ago while I was prepping some new brushes I had gotten from Japan I decided to try singeing and shaping a few of these to see how they would perform if I modified them the way I do my good brushes. Surprise, surprise they worked pretty well; on small blocks, they covered well and now that they were singed and the hairs split/tapered they spread out the color evenly enough to use them for my last print--and well enough that my "Pinwheel" print was printed using just these brushes for the color blocks.
While almost worthless as purchased--after a trim with some scissors and a brief stint singed on a hot plate and then worked on a sandpaper "sharkskin" it's a whole new brush.

Nowhere near as soft or well-made as my professional brushes and much harder to clean but at $4.00.....I can afford to spend more time washing them...and for beginners they're more than adequate.

So after this small success I looked around the house for bigger, better quality Italian brushes:
I found these two brushes that were designed for painting wooden trim--the one on the left has been trimmed, singed and then worked on a piece of sandpaper to soften the tips. They too worked pretty well for moku hanga. They were a bit too soft...but color blends were decent and they're pretty serviceable if you don't need perfectly smooth coverage.

So, emboldened, I headed out to the craft store nearby that caters to the faux finishes and interior house painters....it turns out that Italy is also a pretty significant brush making country and the OMEGA line of brushes included lots of different sizes and types of bristles.

Unfortunately, they're all marked "Pura Setola" which I can only loosely translate as animal hair.....some were clearly pig bristles, some made from horse tail and some are probably ear and back hairs....some are beige and soft, some are white and stiff and some are black and coarse. 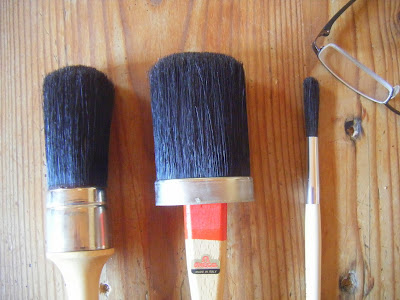 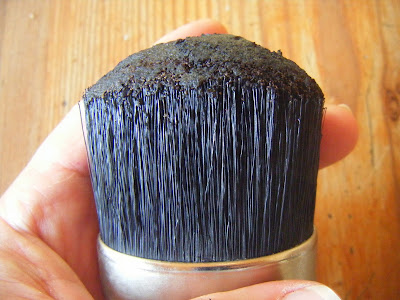 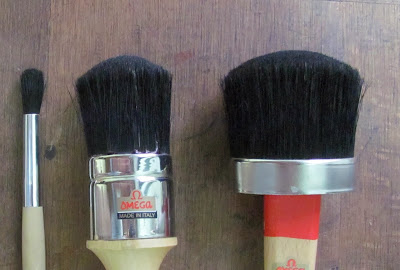 I decided to shell out some real cash and I bought two fairly big brushes and one small detail brush. They set me back $5.00, $12.00 and $17.00for the larger brushes that if they were good Japanese brushes would have each cost over $75.00.....
The above photos show the brushes as purchased (with long, flexible black hairs), then after singeing the brush to a soft curve, and lastly with the brushes finished after trimming them with scissors, singeing them on a hot pie tin over a gas flame and then worked across a strip of sandpaper for 20 minutes.
These look and feel like horse tail...they're fairly coarse....definitely a little coarser than my professional Japanese brushes.
They look pretty good.
They feel pretty good.
Definitely a little coarser and stiffer than my other brushes and the handles will be harder to use than the "shoe brush" maru bake I like to use.

I'll let you know how they work out: I'm still working on 4"x6" prints and will have to break out a big block of wood to test these brushes to see how they do.

I will say that while in the brush shop I also picked this up: 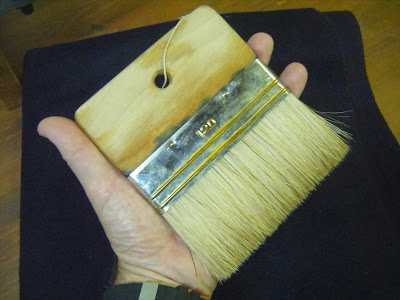 I used it during my last paper sizing trials....and I'll post about it soon.
Posted by Andrew Stone at 4:15 PM 4 comments: