The Blogspot Visit counter says that as of this writing I have 49,317 visits since I started writing here in 2008.  With about 100 visits a day, I should be reaching 50,000 visits to this site in less than a week.
Ironically, for an Art--(and sometimes farming)-- blog, half of all visits are for the posts dealing with my home-made, adobe/cob pizza oven.

Food trumps Art. Or at least Pizza trumps Art.
So, in honor of the Great Day when I will reach 50,000 visits and in respect for the vast hordes that check in regularly from Poland, Russia, China, India, and elsewhere for my infrequent oven posts I have created a new etagami featuring perhaps the most popular pizza here in Italy,
Pizza Margherita;  roma tomatos, mozzarella (should be buffalo milk) and basil--thin crust and baked in a wood-fired oven.

I will be giving it away to a random visitor to my blog between now and the day I hit 50K.

To be eligible you must leave a comment here and I will randomly select the winner and mail this etagami to the Lucky recipient.
With just 59 regular visitors, the odds are certainly better than your local lottery.....
Posted by Andrew Stone at 3:36 PM 10 comments: 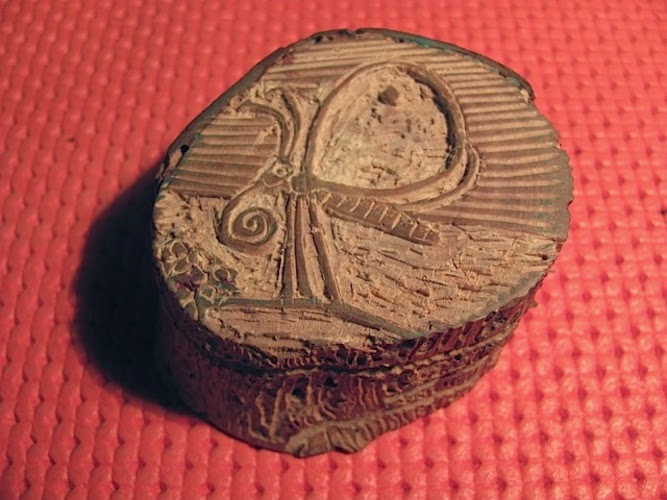 I'm still just messing around with some off-cuts of dead wood from the fields.
I have one of the olive branches from several posts ago that was dry enough to work on my engraving. I'm still learning how to hold the tool properly and getting a feel for how the different tools create varying lines--but mostly I'm learning how to control the tool held almost horizontally to the wood surface instead of almost vertically as with the hangi-toh that I use during the moku hanga carving I do.

This was based on a simple doodle of the cabbage butterfly. The drawing was bigger and more decorative so for this small round I just sketched out the butterfly and a flowering twig.
The olive was harder to carve than the boxwood from my cardinal creeper print and my rough handling shows.

I couldn't find any relief ink--Rigacci--THE local art store has "stopped carrying it" so all I had was a tube of Charbonnel etching ink. It was too soft to properly roll out and it didn't print well. It was too soft so filled the lines and then wasn't tacky enough to hold the dampened paper down and a bunch shifted as I was printing and had to be thrown. I had 4-5 mediocre prints of which this was one of the best....(and it is still poorly printed--too much ink and poor impression to the margins). Another, on Italian etching paper, didn't want to sit still and I ended up printing with too little pressure for fear of it shifting.

Nevertheless,
With a little watercolor, a touch of pen and ink for the weak spots and gaps
it made a nice little birthday card for my mother-in-law who turned 89 yesterday.


Now to find some relief ink! I'll try and print a couple more of these just for fun.....
I've been hesitant to break out the good wood, but it's time to try something a little better and bigger....but I have a few moku hanga projects first so stay tuned (if  you were ever tuned.....).
Posted by Andrew Stone at 1:54 AM 3 comments:

Driving in Florence: Right of Way


During one of my longer sojourns in Italy (lasting 8 years), I became officially an Italian resident and that meant that I had to get an Italian driver's license.
But in Italy, that is more complicated than it is in the US where one used to be able to just show up and take the test.
For despite my maturity and long history of safe, cautious driving--I had to go to back to driving school.

It's a month-long class, twice a week, and the instructors will accompany you to the exam and then again later during the actual driving test. The school will also facilitate the medical exam and subsequent documentation needed to obtain an license.  There is a written, multiple choice exam; followed by a driving test and I'd learned that most people go to a driving school to prepare and aide them with the test. The teachers are usually chain smokers and the school is full of an odd collection of people who you'd hate to see actually driving. And not surprisingly,  the things you learn in Italian driving school bear little resemblance to the daily habits of real Florentine drivers. Getting to school,  I'd be one of four cars abreast, crammed into one lane, but then sit in class listening to how many cars are supposed to be in each lane (One).

I had an acquaintance, another artist and an American, who thought that if he just got the book, read it and studied--he'd be able to pass both the written and oral exams.
He was wrong.
When he got to the exam they asked him where he had taken his driving classes. When he replied he had studied at home alone from the book, they would scowl, ask him an odd or unusual question-- and fail him. After two tries he ended up enrolling in a driving school--and had no trouble passing both the written and practical exams.

So when it was my turn, I just signed up for a class at a driving school in my neighborhood. I'd learned enough Italian by then to be nearly fluent so I elected to take the written exam (the one used for Italians), rather than the oral exam for foreigners where I knew I'd be at risk of anti-American bias....besides, I'd also gone to medical school....so multiple-choice questions-- even badly written--were a breeze for me. 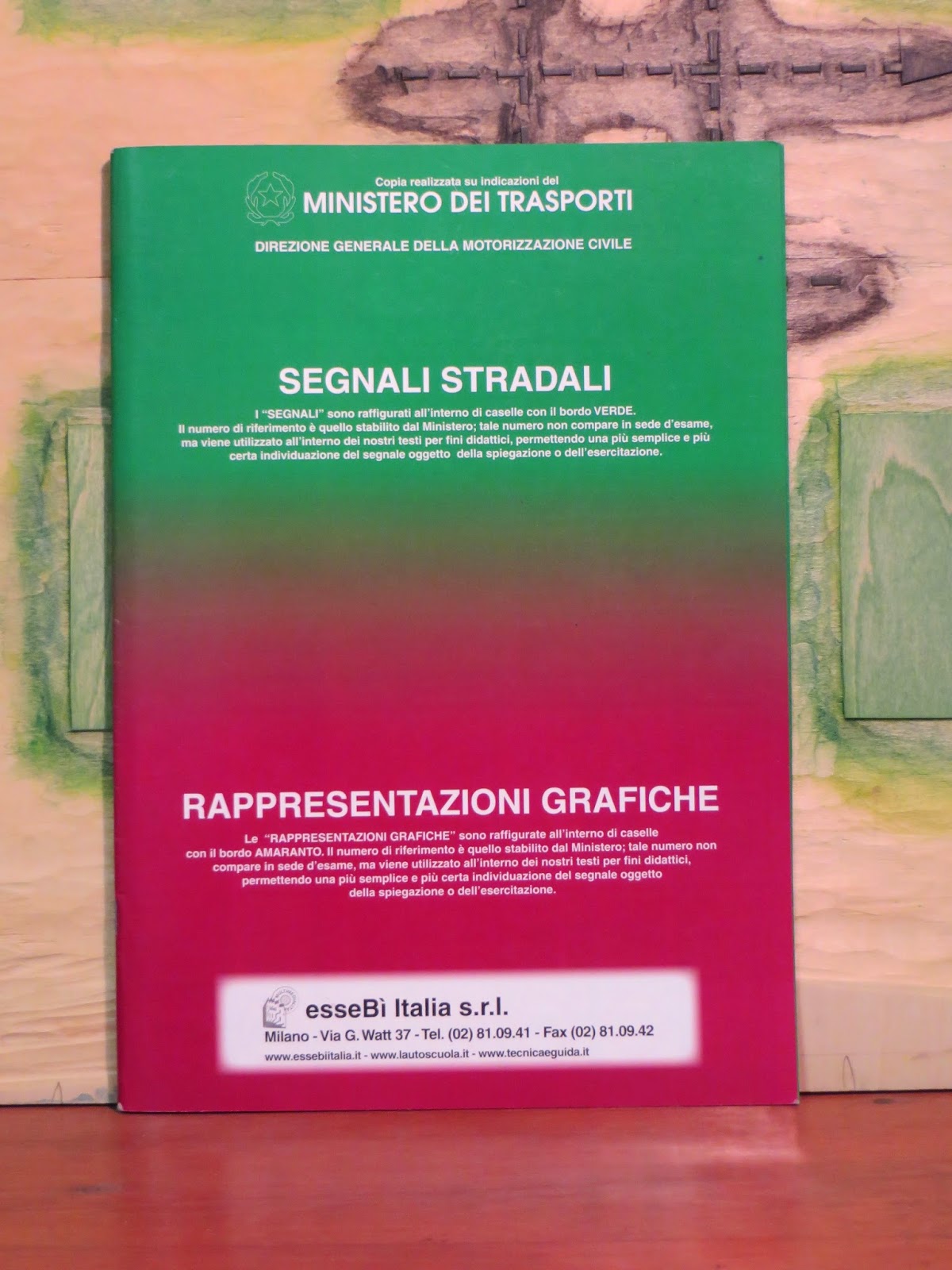 In my class there were 3 Filipino nuns, the aide who rode my son's school bus to elementary school, a handful of nervous 20-year olds who had already taken, and failed,  the exam a couple of times, and 2-3 middle aged folks who had never gotten a license out of fear of test-taking, or just of driving.

I spent time learning how many axles are allowed on trucks while driving on secondary roads both in and outside the city limits, how potent a motor was allowed on mopeds and motorcycles, at what age one can drive a car, a tractor, a bus, or an "APE"--those odd, three-wheeled, small motored carts that putter all over town.
Meanwhile, the really important questions  (whether or not you can park illegally in front of the coffee bar, next to the three police cars that are parked on the sidewalk, or whether I have to wait till they leave or why there is ALWAYS a car parked under the sign that says "NO Parking anytime-tow away zone"?) were not discussed.

So this print is based on the driving exam one has to take in Italy.  It comes directly from the handbook of signs and rules that they give you when you sign up for the class. There are about a dozen of these diagrams illustrating the right-of-way, some obvious, others less so. 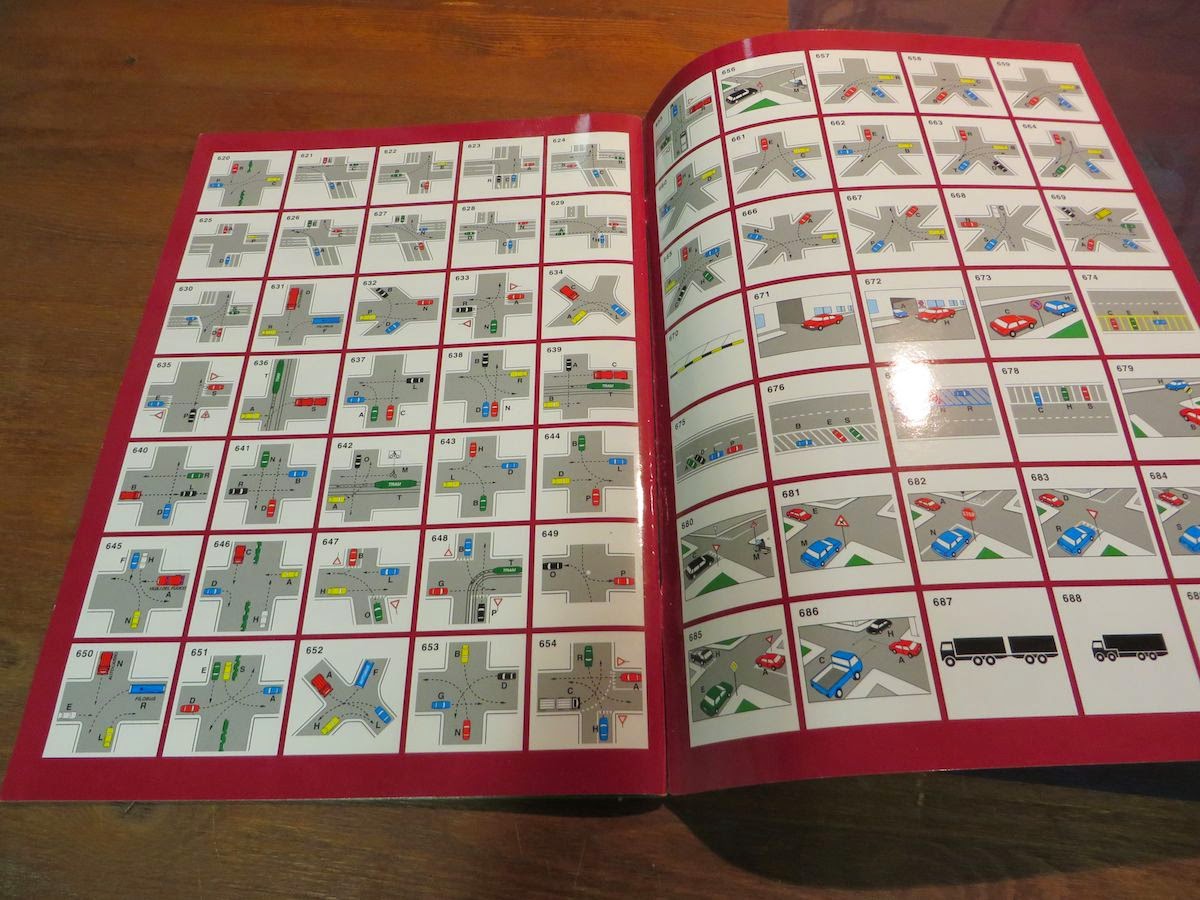 This one was the question they'd ask foreigners who said they'd studied at home:
"Who has the right of way when four cars arrive simultaneously at an intersection--and how do you proceed?" 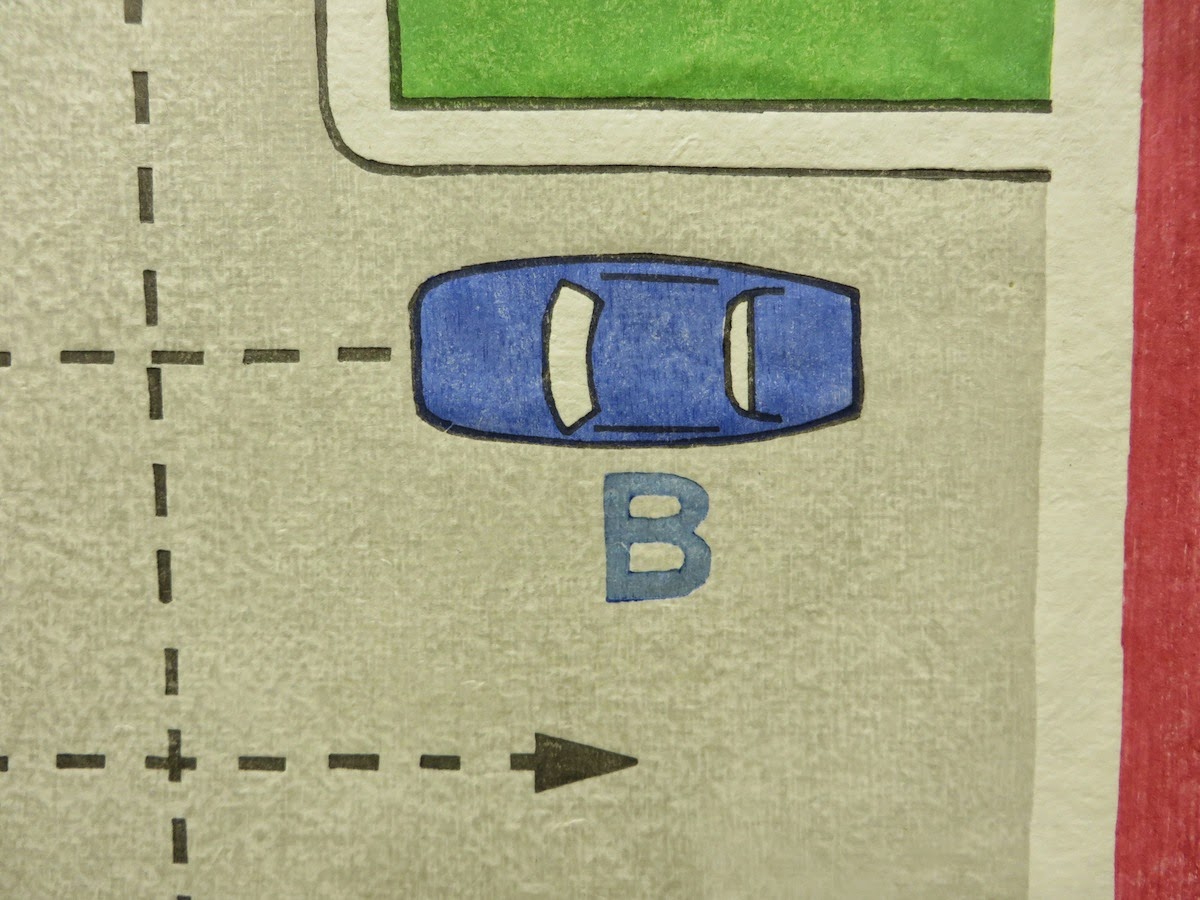 What do you think?

I'm near the end and that's a good thing as with each new block and layer, I like this less and less.

Yesterday, I  got rid of the chop and added the letters---a pthalo-blue/indanthrone mix, diluted with rice paste. Today, after a lot of misgiving, I added the red border (two passes: first a magenta, followed by a more amaranth-red).

As I expected, the bold red changes everything. Now I'm not so sure about the green....but if I darken the green, I'll need to deepen the gray.....and if I deepen the gray, it will cover the letters.
So I stared at it for a long while and then  just put them back in the damp pack, deciding to mull it over until tomorrow.

I need to finish as it's time to move on and these have been sitting in a damp pack for almost a week and I don't want them to go moldy on me. ( I added a little formalin to the damp pack since these are too big for the fridge).

Posted by Andrew Stone at 12:27 PM No comments: 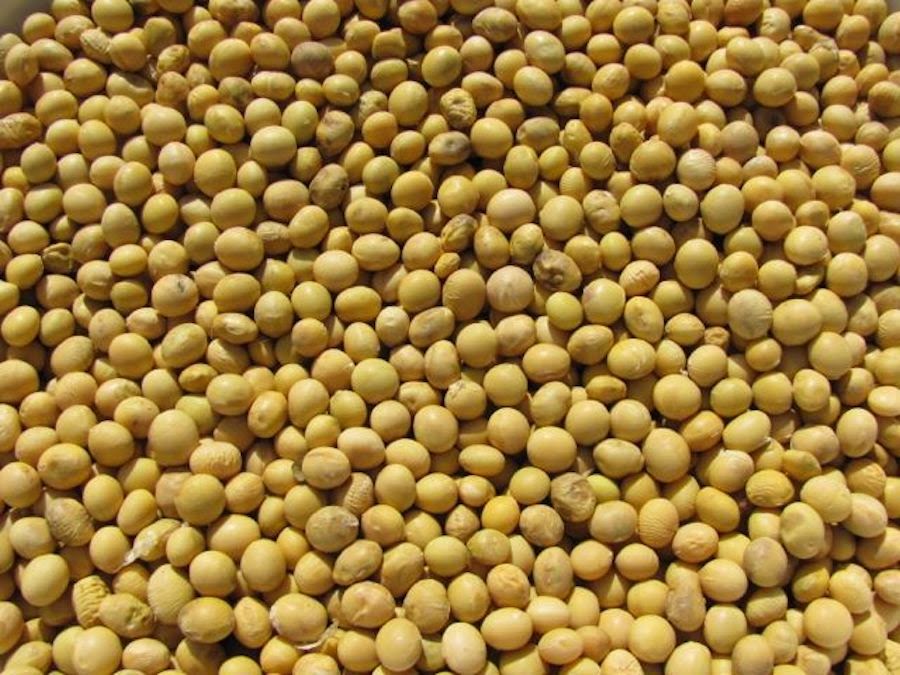 I planted edamame (green soybeans) in the garden before I left Italy this Summer because we like to eat them and they're hard to find here.  But we were delayed coming back, so instead of finding 4 long rows of plump, green pods, the beans were already too mature--turning tan and rough. I crawled about at the bases as a few plants in the shade hid a few green pods--and these we ate that night, steamed and salted--a simple treat made exotic by the local scarcity.  But the rest I let dry in the field...and these will hold until next summer. Since these are organic, non-GMO soybeans specifically bred for edamame production.... the seeds are more valuable as next year's crop than as this week's dinner. 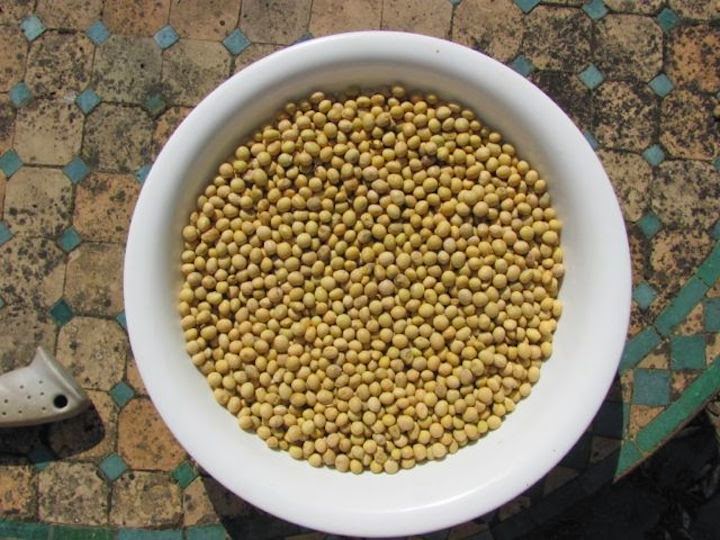 Posted by Andrew Stone at 4:07 PM No comments:


This is moving along, but it's getting a little chaotic.

I printed all four cars at once so that meant four brushes and four pots of color. One car (and sometimes, two) had to be printed twice so I'd lift that corner, rebrush pigment and print again without moving the whole sheet.

Since I'm using different papers with different thicknesses and fiber contents, some sized professionally and some by me, some on both sides of the paper and some just on the printing side....there are a lot of variables and printing this is rather complicated with both tube and bottle colors, brushes, multiple barens, a very large damp pack, carry and printing sheets.....

It's also a big sheet: 18" x 20", so I'm using a carry sheet of acetate to carry the damp paper to the inked plate; then replacing that with a thinner sheet of oiled paper to allow me to burnish vigorously without damaging the backs of some of the more delicate papers.
On the really thick papers (85-110g/m2), I'm using the ball-bearing baren to start with the protective sheet. Then taking that off and hitting spots with the heavy Murasaki baren.
But on the thinner papers (39g/m2), I'm using just the medium baren. I'm definitely getting a work-out and I'll need to change the baren covers on a few of these once I finish with this print run. 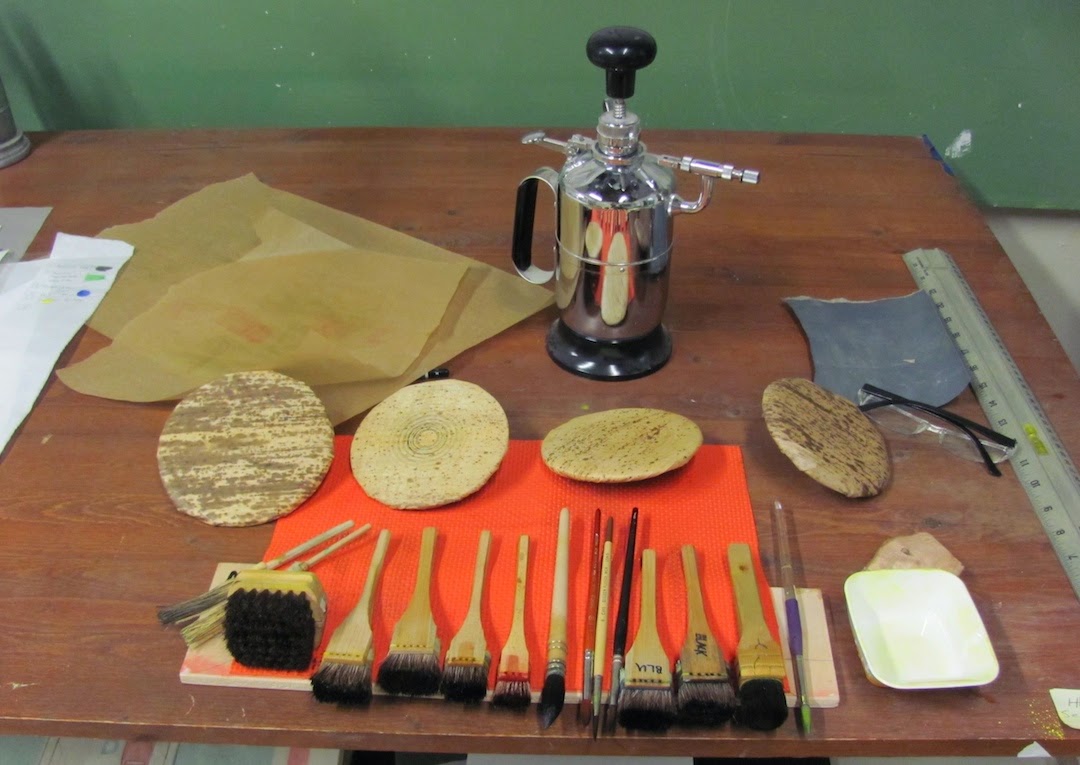 I've two more blocks and maybe 2-3 more impressions to go. One is a big colored border around the whole image...I've been putting it off as I'm not sure it's going to work.
Tomorrow will tell.
But first, I need to mix up a new batch of paste.

Posted by Andrew Stone at 2:56 PM No comments: